Moto Guzzi celebrates a century of motorcycling history.
Forever faithful to its values, timeless and always fashionable, it representsan authentic passion for motorcycles.
Being a Guzzista isn't about the bike you choose, it's about who you are

"From the first post-war period to the Covid-19 pandemic, a hundred years overcoming any war"

A hundred year of outstandin motorbikes, victories, adventure and celebrities that defined the myth of the Brand of the Eagle

"From the first post-war period to the Covid-19 pandemic, a hundred years overcoming any war"

For Carlo Guzzi, Giorgio Parodi, and Giovanni Ravelli, the dream of “manufacturing and selling motorcycles and pursuing other activities associated or connected with the metallurgic and mechanical sectors” was born well before the legal entity known as the Società Anonima Moto Guzzi was established on March 15, 1921. It first arose during World War One: less in the muddy trenches than in their heroic antithesis—the aerial theaters where the flying aces of the period risked life and limb to vie for glory. Motorcyclists and aviators one and all, Guzzi, Parodi, and Ravelli lived and breathed both the heroic and unheroic realities of the Great War. Like many in their generation, they looked beyond the mud and fixed their gaze instead on the glimmering roadways, waterways, and skyways of the future. It mattered little whether the velocity in question was celestial or terrestrial or maritime. Speed meant everything: scientific progress, industry, and innovation; the advent of a civilization of machines; new freedoms, pleasures, and forms of recreation. They embraced all of its expressions no less than the sacrifices demanded of them by such a cruel deity, first among them the passing of Ravelli in a crash landing on August 11, 1919. Parodi and Guzzi memorialized their friend by selecting an eagle with outspread wings as the company logo. That was one hundred years ago. The company that they built as a living monument to Ravelli’s memory has now rounded the century mark. Moto Guzzi was on the pace right from the moment when the first motorcycle rolled off its production lines in Mandello del Lario. Initially branded G.P. (or Guzzi-Parodi), but soon thereafter labeled Moto Guzzi, the first model was the Normale: a vehicle whose performance specifications were anything but normal by the standards of the era. The next five decades of Moto Guzzi frames and powerplants would prove no less successful, whether on the track or on highways and city streets. The latter ranged from small- to midsize- to large-displacement engines packaged in a dizzying array of configurations from singles and twins to fours and even eights—the case of the celebrated Otto. Around the year 1965, at the summit of this evolutionary chain, the motor that has become the signature of the marque from Mandello makes its debut and marks a shift: the transversal 90 degree air-cooled twin.

The shift was a shift in philosophy: towards performance aligned with real world needs, away from a focus on performance for performance\’s sake, away from relying upon the racetrack to drive the development process for future vehicles. Durability, repairability, usable performance, torque rather than vertiginous horsepower, became the mantras in Mandello. Coupled to Moto Guzzi\’s industry-standard shaft drive, this robust and reliable powerplant was originally built with highly demanding institutional uses of motorcycles in mind (such as policing). Over subsequent decades it has undergone a legion of refinements. But, in so doing, it has remained true to its original personality. From the moment of its foundation, the brand of the eagle didn\’t just soar over track and tarmac. It also tackled jaw-dropping off-road travels as when, in 1928, Carlo Guzzi\’s older brother, Giuseppe, carried out a 6,000 kilometer raid from Mandello to the northernmost point of Norway on a purpose built Moto Guzzi GT 500 (subsequently dubbed the Norge): an arduous enterprise given the state of period roads and the vicissitudes of weather in and around the Arctic Circle. The company\’s spirit of adventure never restricted itself to the off-road realm. It expressed itself as a relentless appetite for invention and innovation, particularly during the brand\’s inaugural half-century. Moto Guzzi pioneered twin ignition cylinder heads, the first motorcycle center stands, elastic frames built around an enclosure housing four springs plus a tubular swingarm, linked braking systems, automatic transmissions (like the one found in the 1000 Convert), the Compact Reactive Shaft Drive system that separates the shaft final drive's torque reaction from the suspension via floating torque arms… the list is long. One hundred years after the Mandello eagle first took flight, hundreds of models and innovations later, after many millions of rides have brought the elation of speed to motorcyclists around the globe, Forward ushers in a second Guzzi century. 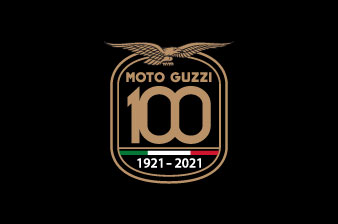 A century of motorcycling history constantly at the cutting edge, with the ability to innovate while keeping faith with values and traditions